Polish Police was established on the 24th of July 1919 by the Act of ‘’Sejm’’ – the lower chamber of Polish parliament of the Second Polish Republic and recently has celebrated its’ 95th birthday. Today, the organisation employs over 100.000 police officers and has just emerged on a new journey called ‘’A programme of modernization of Police, Customs and Boarder Services, Fire Service and Government Protection Bureau’’ allocated for the years between 2017 – 2020, proposed by a current Minister of Interior Affairs and Administration, Mr Mariusz Blaszczak in 2016 and accepted in 2017 by Polish ‘Sejm’.

Monika Baylis who is in her final year of PhD at the University of Huddersfield, argues that the Act, which was a continuation of the previous Act dated from 2006 can be seen as ‘a fresh breath of air’ and much needed ‘’a wake-up call’’ to improve Police service in general which goes along with the view of Polish Police Federation (NSZZ) or NZZPZK expressed in an official letter directed towards Polish government in 2016, stating: ‘’Policja’ has been neglected for many years’’(NZZPZK; 2016, n.p).

Polish Police is based on a centralized model of policing which is similar to Italian or French one. Since its creation in 1919, the organisation went through some difficult transformations by changing its’ name (e.i. from ‘Policja’ to ‘Milicja’ during the communist regime); structure and the role; reflecting some major political, economic and social changes of that times; the First; the Second World War; the Soviet Era, the fall of Communism in 1989; the birth of Polish capitalism in 1990. However, as some Polish academics argue, Polish Police known these days as ‘’Policja’’ faced considerable reforms that resulted in a restructuring of the entire policing model when Polish parliament passed a new Police Act that took effect on April 6,1990.

This Act organized the police force by allowing ‘’Policja’’ to combat crime through the new democratic political framework, where the Minister of Interior Affairs and Administration gained the administrative controls over the institution by becoming ‘’ultimately responsible for “enforcing all statutory tasks in the field of public safety and order” (Pływaczewski and Walancik, 2004, p. 93).

Other reforms occurred independently in 1995 and 1999, which restricted municipal public order forces; ‘Straz Miejska’/ ‘’Municipal guards’’ from using the official title of “police”, and added sub‐divisions within the nationalized force, therefore, widening the scope of Police work by including criminal service, prevention service, drug squads and anti‐terrorism squads.

In addition, the reforms of 1999 introduced major changes in the administrative structure of the police force as they created another level of checks on police power by requiring officers to report to both regional police chiefs and county‐level police chiefs for all police‐related matters. Therefore, each commander of the region and county become responsible for identifying and assessing problems specific to his/her jurisdictions; drug abuse, organized crime, or property crime and then allocating the appropriate resources to address each problem.

This can be seen as a policing model that echoes elements of Community Oriented Policing (COP) model found in the US and it has been argued that it was created to bring officers and community members closer together by forming a trust between police and a public. However, gaining a trust of society can be a tricky issue, especially in the country where people still remember the methods of policing used by Milicja during the Communism time, and recall or witnessed the ‘zero tolerance’ approach or ‘hard policing’ when it comes to public disorder or ‘’hooliganism’’, which is currently used by Polish Police. Therefore, there are mixed messages passed across the country; according to latest statistics published by CBOS in 2016, 65% of Polish public trusted the Police, while the remaining 27% did not. Moreover, recently Polish Media featured and questioned the Codes of Ethics of police officers who dealt with a famous case of detaining of 25 years old Igor Stachowiak from Wroclaw, who died in a police custody in May 2016. 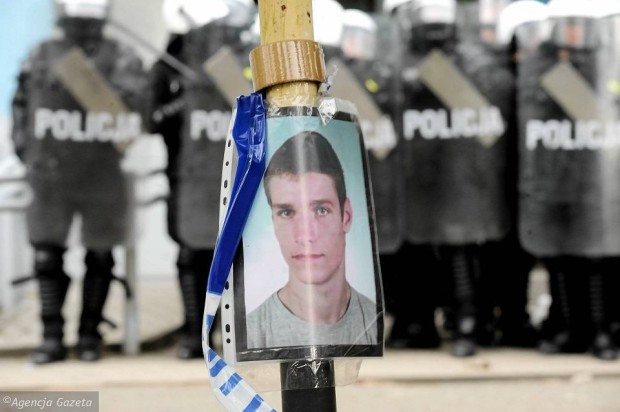 The Police protecting the main exit of Police Station in Wroclaw (Wyborcza.pl, 2017).

The footage appeared on one of the most popular Polish TV channels; TVN24, which prompted massive public and official reaction; public demonstrations in Wroclaw and the dismissal of officers involved in the case.

Although, the case of Igor is still controversial one in Poland, it is important to add that gaining a trust of any community can play an important role in the way the Police is being perceived by others as some scholars argue that people are more likely to obey the law when they believe in the legitimacy of police authority. Therefore, the community policing and Police reforms; ‘’the Programme of modernisation of Polish public services; Police; Customs and Boarder Services, Fire Service and Government Protection Bureau’’ have become a popular agenda in marketing materials of Polish Government or Polish Police. This can be seen as the latest mission to improve the organisation’s image and the existing model of policing by adding a new rank of NPT officer known as ‘’starszy dzielnicowy’’; using social media; Twitter; FB; National TV or by taking on more pro-active approach by helping out with the National Programme called ‘’Kreci Mnie Bezpieczenstwo’’ – ‘’ Safety first’’ funded by Polish Government, where police officers from prevention units regularly visit local schools and interact with children, young or elderly people by discussing different aspects of ‘safety’, Anti-Social Behaviour or crime.

The arguments presented above have become a part of my PhD Literature Review, however, what is more relevant is the fact, that by being a PhD researcher in Criminology I carried out in total 32 semi-structured interviews with Polish Police and Municipal Guards plus joined them on car and foot patrols between 2015 and 2016. The experience gained and my project, has provided me with a rich data with a basic message to pass on; ‘’The change is needed and welcome by police officers’’.

This can go along with the view represented by Polish Police Federation and a current Minister of Interior Affairs and Administration; Mr Mariusz Blaszczak as both sources keep pointing out that it is high time to bring a modern technology; body worn cameras; faster cars and improve officers’ conditions of work by re-opening and refurbishing police stations; adding updated system of communication or increasing officers’ salary to bring a positive change into the formation and improve the morale in general.

Finally, a recent report carried out by NIK (National Audit Office) in 2016, revealed that there is still plenty to do; increasing hours of Police training, introducing new equipment, and finally defining the role of the NPT officer itself. Yes, the list is vast and some work; testing body worn cameras; opening new police station or signing on new ammunition’s suppliers has been in the process but there are still three years left to be able to comment on the current work of Polish government and the evaluation of the reforms shall be carried out afterwards to see ‘’what works’’ or could be changed in the future. Therefore, a waiting game is on and let’s hope all actors involved will get it right as the safety of Polish public and the future of Polish Police is depending on the decisions of current government and the Chief Constable; Dr Jaroslaw Szymczyk.

Ivkovic, S. and Haberfeld, M. (2000), “Transformation from militia to police in Croatia and Poland – a comparative perspective”, Policing: An International Journal of Police Strategies

Pływaczewski, E. and Walancik, P. (2004), “Challenges and changes to the police system in

Poland”, in Caparini, M. and Marenin, O. (Eds), Transforming Police in Central and