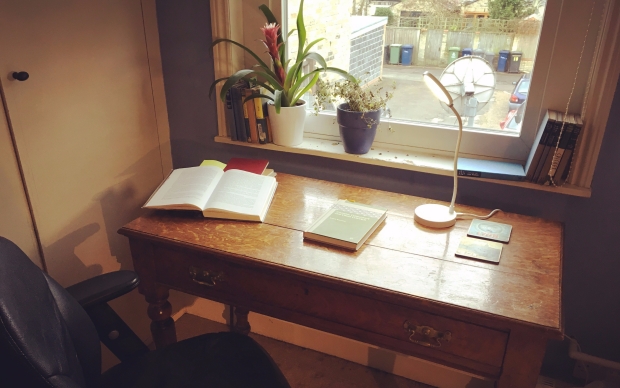 When I first started thinking about doing a PhD, I had no real idea what it entailed, and I’d been years out of education. I had a decent job, but I knew if I wanted to do more on policing – which was increasingly what was interesting me – and less on Belgian fighter planes (it was a strange old job), then I needed to go and study more.

I had a friend who supervised PhDs and he talked me into signing up at Anglia Ruskin as a part-timer. I went to a couple of introductory sessions that the university laid on, and I knew I’d found where I needed to be.

And then I did bugger all for a year.In my defence, I’d just got elected as a local councillor in Cambridge, while my full-time job was in London. I was commuting for four hours a day, then going to meetings in the evenings. At weekends, I went campaigning and tried to keep an allotment going. Frankly, signing up for a PhD was completely insane.

It got to the point by the end of the year that I knew that something was going to have to give – I couldn’t keep everything going without breaking.

So I jacked in my job. Obviously.

It was like jumping out of an aeroplane without a parachute. The next few years were a precarious balancing act between finding and working enough part-time jobs to survive, council responsibilities (I was an executive councillor and deputy leader of the city for a while), trying to inch forward with the PhD, retaining some semblance of a life, and growing giant weeds. Reader, I failed (apart from the last bit).

It took me the best part of four years to get into a position (clearances, access etc.) to do fieldwork, and by then I’d nearly forgotten why I’d started the doctorate in the first place and what it was that fascinated me enough about the subject to keep plodding on.

The fieldwork saved me, and my PhD. I was passionately interested in the people I was talking to and the work that they were doing. It was like a tiny falling in love every single time I undertook an interview or observation. I had the best part of a year (squeezed in around trying not to starve or get evicted) of having my delight in the subject revitalised every couple of weeks. I’ll be grateful forever for the police officers and ordinary local residents who gave me their time and their trust.

The shape of the PhD has changed profoundly, and a couple of times I’ve been convinced that I’ve wasted not just weeks but entire years. But coming into the final straits, I feel like I can see the shape of it and how everything I’ve (very slowly) done over these years is all finally contributing; that nothing has been wasted, after all, even if I have written about four times the number of words I’m actually allowed to include.

It doesn’t look anything like I thought it was going to at the beginning – it’s taken on a life of its own. And my life has changed along with it. Not just professionally (though I’m now actually employed with an actual proper job, God Bless ARU and all who sail in her), but also in personal ways.

I’m more bruised, and less confident, and much more open to learning and to being wrong about everything. I’m more resilient, and more focused. I hope I’m more thoughtful. I am still a truly terrible allotment gardener, but if anyone’s interested in slugs the size of space hoppers, we can do a deal.

The story’s not done yet, but I’m starting to see the end.

What’s your #postgradstory? Leave a comment – or better still, write us a blog (you can contact us here).

One thought on “My postgrad story”